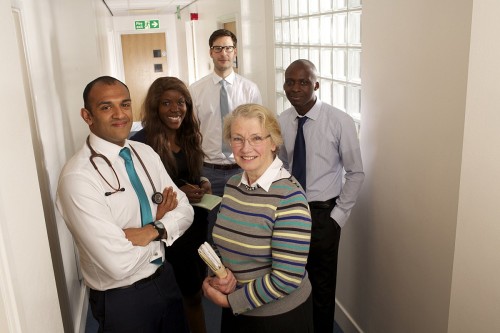 This programme, in the same vein as ‘One Born Every Minute‘ and ‘24 Hours in A&E‘, concentrates on an ordinary doctor’s surgery in South West London and the sort of patients they have to deal with on a daily basis. Let’s face it, we all go to the doctors and when we sit in the waiting room, we all wonder what the other patients are going in for. Well, we get the chance to find out now. There was Vittoria, a rather sad soul who went, primarily, because of a throat infection, but it was a mask for all the other problems she had. She was an alcoholic and kept apologising to the doctor for her smelly breath, and when the doctor was nice to her, she gave him a hug.

There was an adorable couple who I suspect visited the doctor far too often because they saw him as a support system, and shockingly, a young girl who thought she had an STI and was clueless about contraception. Does that really still happen in the early twenty-first century?

My personal favourite was Christopher, a camp little man who has a rash, he suspects, from rubbing his face against his cat, and to cure it, he is washing his face in Listerine. The two most touching moments were when an elderly man clearly had memory problems, and yet was in denial and the doctor became tearful from both her frustration and compassion towards this poor man. We tend to forget that doctors are human beings with feelings too, and that sometimes their patient’s problems are going to strike a chord with them. Then there was the poor young woman with a personality disorder who was not bathing, felt suicidal and was convinced she had fleas. The only time she was happy was when she was walking her dog. I just wanted to reach through the TV and give her a hug. She seemed so lonely. I was happy to see in the final captions that she’s feeling a little better.

This wasn’t the usual sensationalist Channel 5 claptrap, but instead was a balanced look at the daily problems facing a cash-strapped NHS, and GPs who are facing funding cuts, when in reality they provide a vital service to the community. 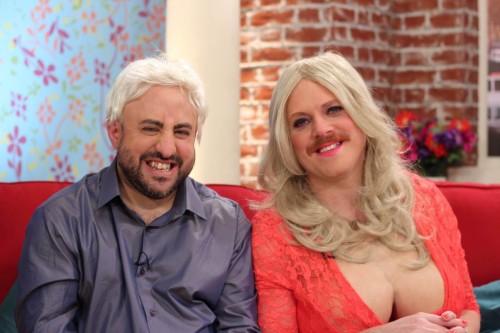 I approached this show with trepidation, as I have suffered Keith Lemon overload for a good while. But I’m happy to say that this was nearer to ‘Bo Selecta‘ than ‘Celebrity Juice‘. There were the odd glimpses of Keith Lemon, but the rest was surreal and disgusting like the Channel Four show. I laughed all the way through, my favourites being My Big Fat Gypsy Kardashians, where the annoying American family were transformed into Irish travellers. Played by men with beards. We also had Michelle Keegan and Mark Wright (who looked more like Bruce Forsyth) and Pharrell wearing a huge hat that covered his head.

My favourite sketch was actually not one featuring celebrities. It was about the Urban Fox. Which was Leigh Francis (Lemon) dressed as a fox in Urban clothing and talking street talk, and coming face to face with a man dressed as a dog. It was funnier than it sounds.

The Trollbusting with Philip Schofield went on too long, but that’s the nature of sketch shows, they are always hit and miss and there are always going to be a few sketches that miss the mark.

Highpoints were the One Direction skit, with Louis Tomlinson being played by a girl; Dickinson’s Any Old Shit, a pastiche of ‘Dickinson’s Real Deal‘, with Francis as a gibbering David Dickinson, and Ed Sheeran as a troll living in a burrow only coming out briefly. I’m afraid Ed Sheeran does have that look to me.

I’m guessing Leigh Francis has a golden handcuffs deal with ITV, which is a shame because I think if this show got in the hands of Channel 4 it would push the boundaries a bit more and we would be spared the Ant & Dec and Piers Morgan skits which just seemed to serve as advertisement for ITV shows. But as comedy shows go, especially from a big name comedian, this was a hit for me and I’ll certainly be tuning in next week. 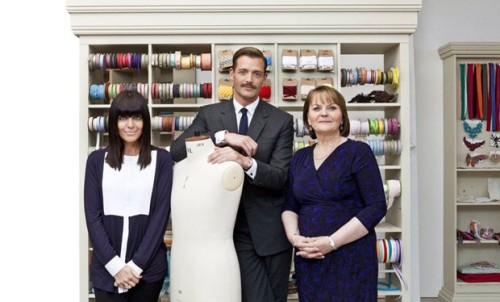 This was going to be a review of ‘Inside the Commons‘, but I saw a photograph of Patrick Grant, one of the judges and I’m sorry, yes, I am that shallow, I knew I had no choice but to watch it. I promise not to go on about PG, but he is so handsome and tall, and has a lovely tache, and he looks like something from a 1930’s movie…dreamy doesn’t even begin to describe it. There I’ve got it out of my system.

‘The Great British Sewing Bee‘ is just ‘The Great British Bake Off‘ but with fabric instead of flour. There is the usual bunch of wannabes who want to be acknowledged for their sewing skills rather than their baking, although I’m not quite sure what the winner gets, maybe a book deal instructing people how to put in an invisible zip…

Claudia Winkleman is her usual genial self as the host, and the judges (stop it Karen) aren’t as condescending as Paul Hollywood and Mary Berry. Dreamy Patrick is a tailor, not sure what May the female judge does, but she seemed very nice, and because sight isn’t as subjective as taste, it was easier to see where they found fault with the garments that were being made; rather than Paul and Mary who moan because something tastes of a bit too much ginger – some people like a lot of ginger. But no one wants to wear a skirt where the zip doesn’t match up properly.

At the moment, the winner looks to be Neil, who is like Louis Spence if he’d gone through army training and married a woman. He seems very confident and able to turn his hand to most things, but it’s early days yet. The loser this week was Annie, the farmer who was lacking in imagination and turned a denim shirt into a dress that looked like a denim shirt. I think Romanian Alex has got lost from ‘The Apprentice‘. She is notoriously hard on herself and failure isn’t an option. Unfortunately people like this usually go home quite early, and she was on shaky ground last night as it was. It was only her victory in the Alteration Challenge where she turned the denim shirt into a Madonna-style 1980s puffball thing, that stopped her from being voted out.

Biggest irritant to me so far is smug Amanda, the deputy headteacher who smiles far too much and I feel is hiding steely ambition behind a twee exterior. She’s like a silent assassin and it wouldn’t surprise me if footage got leaked of her fixing people’s sewing machines so they stitched their fingers to the fabric.

Next week they have to cope with making children’s clothes, so let battle commence and I will be watching because I am interested in making clothes and no other reason.

Karen Mason is a London-based writer. She has published fifteen historical fiction novels and is currently working on her sixteenth. She is also an avid movie goer, with a particular preference for gritty British cinema and a weakness for Jason Statham films! Her music tastes stretch from Muse to the Cinematic Orchestra and she loves discovering new acts.
NEWER POSTGRAND BUDAPEST HOTEL Checks In With Five BAFTA Wins! | FULL WINNERS LIST
OLDER POSTTHAT WAS THE BOX – January 2015 (Week Three)