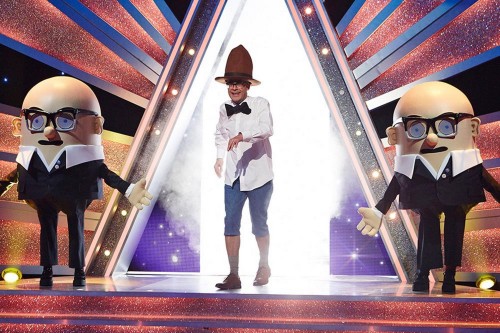 The year is only two weeks old, and yet I think I have already found the worst show of the 2015. When I heard ‘Stars in Their Eyes‘ was coming back, I was very excited, as I used to love it back in the 1990s, when Matthew Kelly presented it. I would watch that, then get ready for my Saturday night out. I then discovered that Harry Hill was presenting it, and I had reservations. Back in the day ‘TV Burp‘ was hilarious, but it quickly ran out of steam, and I find HH a one trick pony. I love surreal humour as much as the next person, but Hill’s brand of comedy is a weird mixture of surreal and slapstick that doesn’t work. I couldn’t see him presenting a show like ‘Stars in Their Eyes‘ without making it about himself, and I was right.

It started off amusing enough, with Matthew Kelly turning up to do the job, before turning into Harry Hill, who then came on dressed as Pharrell, and doing a funny song. It all went downhill after that. He kept emphasising that the Final was not live, which brought home that the whole thing was being taken as a joke. Any fears that this was going to turn into ‘TV Burp‘, soon materialised when the first contestant came on. She was a dog-groomer called Amy, who was impersonating Kylie Minogue, and instead of the usual video intro before the performance commenced, we had a ridiculous skit with Harry pretending to be a dog-groomer, that went on and on and on. There was a moment of interest when we had a woman pretending to be one of the Everley Brothers, but apart from that, Rihanna, Eminem and Christina Aguilera were all pretty forgettable – shoehorned into a ridiculous show, with a cameo from Brian Bellend, the ‘Big Brother‘ winner from years ago, and an ongoing joke about Harry stealing Adele’s baby and hiding it in a drawer. It may have only been on for an hour, but by the end I was losing the will to live.

I don’t know what made ITV resurrect the show with Hill as the host. Does he have something over them that they’re scared of him revealing? I can’t think of any other reason why they would commission such a load of tripe. ‘The Voice‘ feels like pointless viewing, seeing as none of the winners are ever heard of again, but I would prefer to watch this on a 24 hour loop that have to sit through sixty minutes of ‘Harry Hill’s Stars in Their Eyes‘. Please make him go away. You’re not going to turn him into the next Keith Lemon. 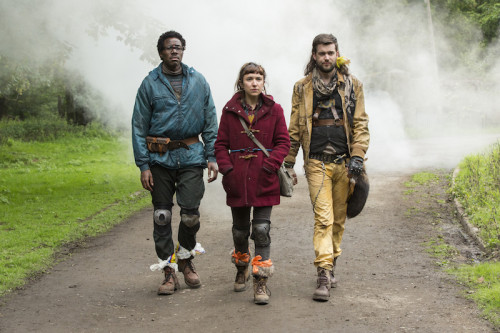 The jury is still out for me on ITV2’s latest comedy offering. The premise is quite unique – a pair of teenage friends decide to sleep together minutes before the nuclear bomb drops, thinking they are going die, but they survive. Despite nuclear fall-out and lack of food etc, they have somehow raised a pretty, healthy daughter and are now abandoned in an apocalyptic world, trying to retain an element of normality.

Tom and Suze are the sitcom staple – two people who can’t stand each other and yet are stuck together. They were funny enough, but the turn of the night for me, came from Jack Whitehall as Oscar – Suze’s childhood ex, and now leader of a bunch of outlaws who rule the local area. The usually posh Whitehall talking like Ali G was hilarious and it was good to see another side to him.

‘Cockroaches‘ wasn’t as funny as ‘Plebs‘, but it was funnier than ‘The Job Lot‘, and I see potential in it. As I’ve never watched ‘The Walking Dead‘, other people’s comparisons mean nothing to me and I’m coming to it with fresh eyes. I’ll certainly tune in next week as it ended where the rather meek Tom had been made leader of the tribe, after chopping off Oscar’s finger, and I look forward to seeing how he copes. 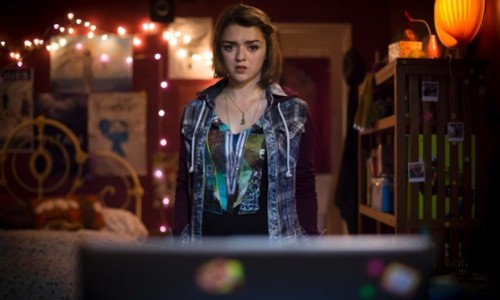 Just as ‘Stars in Their Eyes‘ is an early contender for my worst show of the year, ‘Cyberbully‘ is up there for the best. Starring Maisie Williams from ‘Game of Thrones‘, it was pretty much a one woman show, filmed in real-time, about Casey, a young girl who does what most young girls do these days – shares photos with her friends, criticises other girls and uses the internet as a way of hiding and saying things she wouldn’t dare to people’s faces. After finding an offensive comment on her boyfriend’s Twitter page, she thinks she is roping in geeky Alex from school to hack into her boyfriend’s Twitter account and write something about his sexual performance. From there it all spirals downhill, when we discover she has not roped in Alex at all, but rather an anonymous predator who has managed to hack into not only Casey’s account, but her friends as well, and threatens to upload topless pictures she has put on her computer, to everyone, if she does not comply with what he or she wishes her to do. After pointing out the things she has written about various people, it turns out Maisie is indeed the ‘Cyberbully‘, and even by the ambiguous ending, I was still left wondering if the perpetrator was the father of the girl she helped drive to suicide.

Never having watched ‘Game of Thrones‘, I was not familiar with Maisie Williams’ work, but she is a fine young actress, and her performance, along with a tense and twisty script was enough to keep me glued to the screen for the whole hour it was on. I changed my mind about the perpetrator about six times while I watched, and while the ending was frustrating and I wished we could have found out who was tormenting Casey, I do think the programme had a very important message. We’ve all done it, seen someone weird on TV and tweeted about them or posted a scathing comment on the bottom of a news article, but we forget that person may well read these things and they have feelings and will be hurt and from there all sorts of things could happen. We all need to stop and think about what we’re posting online and realise what we’re saying has an audience that while we’ll never meet them, they exist all the same. I certainly promise to be nicer in my column from now on. Sort of.

Karen Mason is a London-based writer. She has published fifteen historical fiction novels and is currently working on her sixteenth. She is also an avid movie goer, with a particular preference for gritty British cinema and a weakness for Jason Statham films! Her music tastes stretch from Muse to the Cinematic Orchestra and she loves discovering new acts.
NEWER POSTCORRIE Cast Members Pay Tribute To ANNE KIRKBRIDE.
OLDER POSTThe 87th ANNUAL ACADEMY AWARDS – The Nominees!