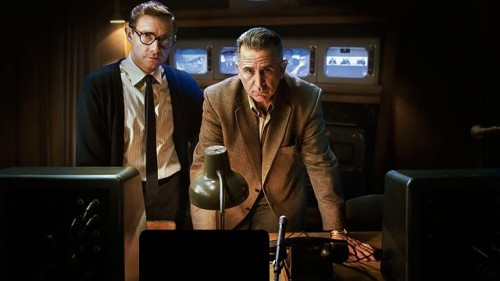 This drama did not get much of a fanfare, which is weird given that it stars Martin Freeman who is hot property due to ‘Sherlock‘ and ‘The Hobbit‘. I guess the subject of the Holocaust is a bit old hat now given the never-ending debate about Israel and who it really belongs to. But this is a shame because it was a valuable piece of television, and hopefully the little fangirls who love Freeman’s more popular wares will have tuned in and learned something.

The programme was a drama-documentary based around the televising of the trial of Adolph Eichmann, the Nazi responsible for the transportation of millions of Jews to their death. That the trial was being held in Israel was one thing, secondly, it was the first time the public would hear the true horrors of the Holocaust. It was part thriller, with Milton Fruchtman (Freeman) the producer having to cope with threats being made to his family by Neo Nazis determined to stop the broadcast; along with a soapy element where director Leo Hurwitz (Anthony LaPagalia) battles his own demons in able to direct it. But this was all a prelude to the trial. The drama was interspersed with real footage of the survivors of the camps recounting what happened to them. Then when that was bad enough, Hurwitz decides to put a spotlight on Eichmann – who shows no emotion about the atrocities he committed – while film is shown of the liberation of the camps, and the sight of children who are little more than skin and bone, and soldiers clearing away piles of bodies like they are rubbish on a landfill site, but there are so many of them, burying them individually would be a logistical impossibility.

Eichmann was found guilty and sentenced to death, and from then on, survivors felt they had a voice and the world got to know exactly what happened in the death camps. For me, the story of how the trial was televised was secondary, and I would have been happy enough to watch a documentary about it. Freeman, adorable as he is, was playing Martin Freeman with a passable American accent, and there were no strong women. Even Rebecca Front, as Hurwitz’s landlady, seemed somehow wasted in a role which could have been strengthened. LaPagalia gave a moving performance, especially when he watched Eichmann, forever obsessed with him showing emotion, desperate to see some humanity in this monster of a man. It never happened, but at least Hurtwitz and the millions of other people who suffered saw some justice when Eichmann was convicted for his part in the war. It’s just scary that genocide still goes on today, and until human nature changes, it will never go away. 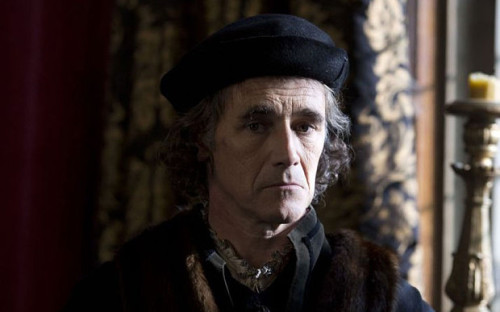 I approached ‘Wolf Hall‘ with an open mind. I haven’t read the books, but I did love ‘The Other Boleyn Girl‘ and must have been labouring under the miss-apprehension that Hilary Mantel’s books were similar to Philippa Gregory. Big mistake. Gregory concentrates on female characters, whereas Mantel focuses on Thomas Cromwell (Mark Rylance), the low-born man who seems to have been a lawyer, a sailor and goodness knows what else, before becoming an advisor to Cardinal Wolsey (Jonathan Pryce), and eventually a key player in King Henry VIII’s divorce from Catherine of Aragon and his marriage to Anne Boleyn.

My knowledge of Tudor history doesn’t go much further than ‘Blackadder II‘, and I thought I might learn something, but the majority of ‘Wolf Hall‘ just seemed to consist of shots of Cromwell walking around. There were far too few women it, and when they were, they were tragic (Catherine of Aragon), bitchy (Anne Boleyn) or playful (Mary Boleyn). At this point, the story is dominated by men. Men sitting around debating Wolsey; young Cromwell being beaten by his horrible father; Mark Gatiss playing Mycoft Holmes in a funny hat. Damian Lewis made a sexy but believable Henry VIII, but that’s not going to be enough to keep me watching. It seemed like the longest hour of my life, and I found myself willing for it to stop. Where’s Lucy Worsley when you need her?

‘JOSIE CUNNINGHAM – THE MOST HATED WOMAN IN BRITAIN?‘ (CHANNEL 4 – 4OD)

Even now, several hours after watching this, I’m still wondering if it was some weird, Chris Morris spoof about how an absolute nobody can become famous for doing absolutely nothing. Josie Cunningham first made the headlines when The Sun ran a story about how the NHS paid for her to have a boob job because she had been born with a congenital disorder that prevented her from developing breasts, which had led to her being bullied at school. That should have been the end of it, but for some reason, Cunningham, with her talent for self-publicity, has become so notorious, she was even considered for ‘Celebrity Big Brother‘ – so much so she was willing to abort her baby to do it, because in her eyes this would provide for the children she already had.

Somehow, she got herself a manager, a weasely little bloke called Rob, who advised her to tell the papers she was planning on selling tickets to the birth of the nearly-aborted baby. Rob also tells her what to tweet, to provoke the most outrage (at least Katie Hopkins writes her own tweets) and keeps a sort of mood board of the journey he wants her road to fame to take.

These truly were a vile pair. While she is never going to win ‘Celebrity Mastermind‘, Cunningham does not appear to have come from a disadvantaged background like Jade Goody, or is emotionally needy like Kerry Katona. She is just lazy, money-grabbing and hungry for fame, at whatever cost. I’m surprised that a respected channel like Four gave her the time of day. I thought she was more Channel Five‘s bag. But then again she’s come off benefits and is now ‘self employed’ so she isn’t quite down at heel enough for a Five.

Karen Mason is a London-based writer. She has published fifteen historical fiction novels and is currently working on her sixteenth. She is also an avid movie goer, with a particular preference for gritty British cinema and a weakness for Jason Statham films! Her music tastes stretch from Muse to the Cinematic Orchestra and she loves discovering new acts.
NEWER POSTTHAT WAS THE BOX – February 2015 (Week One)
OLDER POSTCORRIE Cast Members Pay Tribute To ANNE KIRKBRIDE.