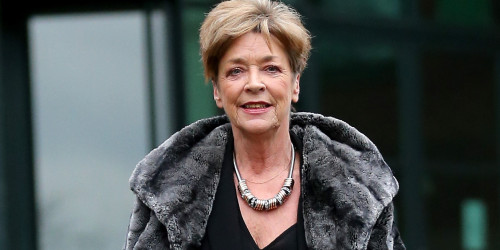 ‘Coronation Street‘ icon and star Anne Kirkbride, who played Deirdre Barlow, has died (19th January 2015) at the age of 60.

A statement from the hit ITV soap said:

“It is with great sadness that David Beckett has confirmed tonight that his beloved wife and Coronation Street actress Anne Kirkbride has passed away peacefully in a Manchester hospital after a short illness.”

William Roache, who plays Kirkbride‘s on-screen husband Ken Barlow, has said the soap has lost one of its iconic characters.

“I feel Anne’s loss so personally having worked closely with her for over 40 years.

“She was such a loving and vibrant person. You always knew she was there because her laugh was never far away.

“She was an impeccable performer with superb comedy timing and an immense gift for really heightened drama.

“We had some rows over the years as Ken and Deirdre and it was wonderful to play those scenes opposite her. Anne will be greatly missed.”

Other ‘Corrie‘ castmates have taken to Twitter to pay tribute to their much-loved colleague and “legend”, who has been on the show for 44 years.

Here are just a few of them:

So very sad to hear our lovely Anne Kirkbride has died. One of the true icons of @itvcorrie. We will all miss you. The nations favourite.

My beautiful darling friend, Anne Kirkbride, passed away in a room filled with love. God Bless, my Darling Girl! Peace and rest!

RIP Anne Kirkbride you will be missed so much #legend x

Ed is an entertainment news writer, and founder of TOMORROW'S NEWS. He always keeps a watchful eye on who and what's trending in the entertainment world. His articles focus on tomorrow's news today, including celebrity news, film news, music news and so much more!
NEWER POSTTHAT WAS THE BOX – January 2015 (Week Three)
OLDER POSTTHAT WAS THE BOX – January 2015 (Week Two)