A HAUNTED HOUSE – One Parody Too Many? 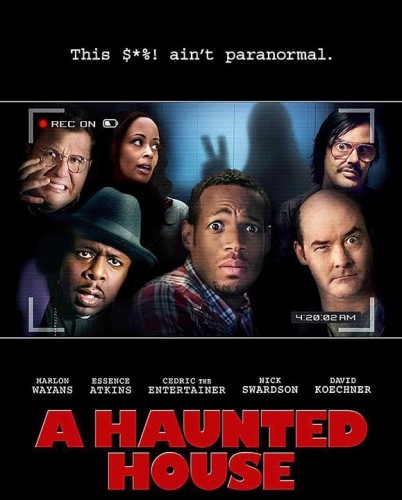 ‘A Haunted House‘ is a parody of horrors of the found footage genre (‘Paranormal Activity‘, ‘The Blair Witch Project‘, etc.) it features Marlon Wayans (‘Scary Movie‘, ‘White Chicks‘) and Essence Atkins (‘Are we there yet?‘), as a couple who becomes tormented by a mysterious entity in their own home, which impacts their sex life hugely.

The film begins quite well; at first the script includes witty lines and dark humour, exactly what the trailer promises. Marlon Wayans’ performance is also a big plus; his acting is decent and funny as usual. If you liked him as Shorty in the ‘Scary Movie‘ franchise, then you’re likely to enjoy this too. Marlene Forte (Rosa), Andrew Daly (Steve) and Alanna Ubach (Jenny) rarely appear, but when they do, they steal the spotlight and bring out some good laughs as well. 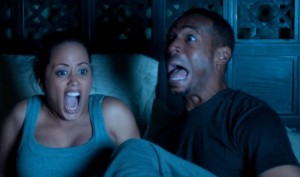 However, it soon begins to go downhill. Half way into it, the humour only gets weaker and weaker. Cedric the Entertainer, David Koechner and Nick Swardson, try too hard to impress, which results in lame, forced humour. The actors are not entirely to blame though, as the material they work with is equally flimsy. Marlon Wayans’ may be a good comedian, but he achieved no miracle with this screen play. To make matters worse, the script also relies heavily on racism, homophobia and sexism for its jokes. Not just trying to be politically correct here, but it also truly comes across as a clumsy, desperate and cheap attempt to make entertainment, not very attractive traits.


I’m a fan of the Wayans’ brothers; I am also a fan of the first Scary movies, but the genre of horror movies’ spoofs has become outdated to me. Just like the never-ending sequels to film franchises like ‘Fast & Furious‘ and ‘Saw‘, also became a massive turn off. They are no improvements of the first films; neither are they just as good – mainly because they go on forever, insisting on the same plots over and over again -, it would have been better if professionals in the making hadn’t bothered.

I went to watch this hoping it would be as good as the trailer advertises it to be, but the trailer’s content is as good as it gets. ‘A Haunted House‘ provides only a handful of laughter, and that’s if you’re feeling generous with the film. I still don’t recommend you spend your time and money on it.

Leticia - mainly known as Tish - is a journalism student based in London, who adores films and tv series. She always keeps up to date with the latest releases, but pays special attention to Thrillers and Dramas. She loves to discuss culture in general; and gets really psyched when she finds new talents on the big screen.
NEWER POSTBOY GEORGE – New 2013 UK Tour!
OLDER POSTDO I WANNA KNOW? – New Single By The ARCTIC MONKEYS!