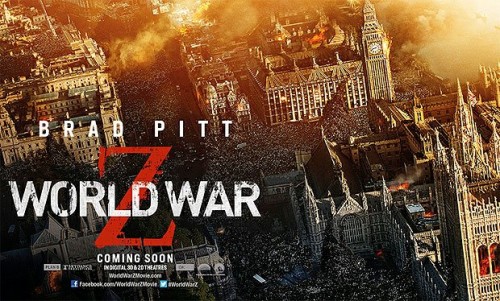 There are very few zombie movies I actually want to watch on the big screen, especially after watching Danny Boyle‘s ‘

Based on the novel of the same name, by Max Brooks, this action thriller begins with former UN inspector Gerry (Pitt), Karin Lane (Enos) and their two daughters venturing into the city of Philadelphia. However they soon discover a wave of terrified people running from a growing number flesh-hungry zombies. I say growing, because with just one bite from a virus-ridden zombie changes a living and breathing human being into a super flesh-eating zombie – in a matter of seconds. 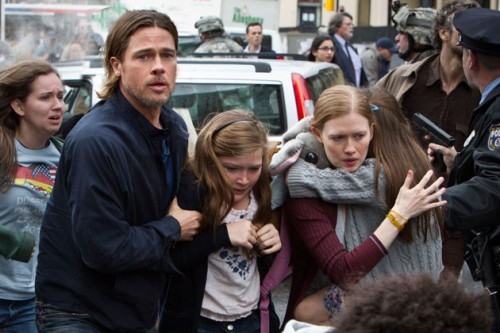 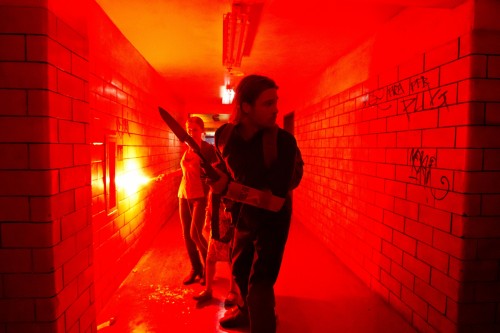 Having sought refuge on a U.S. warship, Gerry is given a life-or-death ultimatum – to lead a team on a research mission to find a cure to the zombie outbreak, or they would reluctantly ditch him and his family on dry land. When faced with no other option, he sets off on the mission, travelling from New York to South Korea, and then Jerusalem to Cardiff (Wales). Obviously the trip is far from plain sailing, as the team numbers begins dwindle and Gerry soon learns that actual cure has certain risks tied to it.

Zombie movies have come a long way since the George A. Romero days, so expect some clever visual effects with this one. Particularly as the zombies begin to build their own form of twisted intelligence and start to form an ant mentality by piling on top of one another to scale a large wall. There are also a couple of obligatory jump-out-of-your-seat moments, as you see a several zombies up-close.

The best scenes include Gerry‘s trip to Israel and the passenger aeroplane incident, where there’s the added quandary of nowhere to run when you’re followed by an army of zombies. However, the special effects alone are not enough to carry a movie into a 5-star rating.

In a movie which is just shy off the 2-hour mark, I couldn’t help but feel that I wanted to see more! But maybe Forster ended it at the point he did because ‘WORLD WAR Z‘ was intended to be as a trilogy? At least that’s what reports suggested in early 2012, when he and the studio were talking about making the movie. I felt it’s strengths were definitely the visual effects and the unfamiliar principle cast members. Even Matthew Fox (‘LOST‘) barely had a few scenes, but maybe this was a good thing. After all, isn’t it a case of less is more?

All in all, it came in over the estimated budget (over $200 million) so the visual effects are good, and the ladies have Brad Pitt to swoon over as he becomes even more appealing as a protective family man. However the movie could have done with an extra 30 mins on top of the running time.

Definitely worth a watch in any case.

Ed is an entertainment news writer, and founder of TOMORROW'S NEWS. He always keeps a watchful eye on who and what's trending in the entertainment world. His articles focus on tomorrow's news today, including celebrity news, film news, music news and so much more!
NEWER POSTTHE PURGE – Purged by its own potential
OLDER POSTNOW YOU SEE ME – Magically Spellbinding Or Camera Trickery?!?