The 10 Lessons We Learned from ‘MY BIG FAT GREEK WEDDING’

Take a peek at the takeaway lessons, from the 2002 movie MY BIG FAT GREEK WEDDING, that can be applied to anyone’s life. 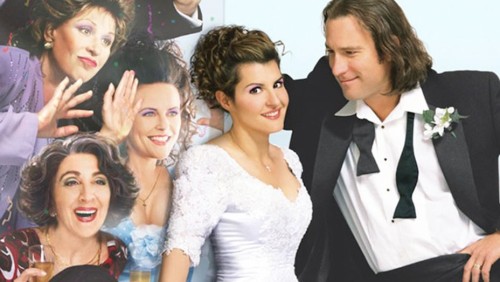 Maybe the iconic 2002 film ‘My Big Fat Greek Wedding’ isn’t a movie everyone can identify with, but we thought that it offered some pretty nice takeaway lessons that can be applied to anyone’s life. Even if you aren’t a Greek-American woman dating a stereotypical WASP, there’s still a thing or two you can glean from the highest grossing rom-com of all time.

While present in almost every romantic comedy, and often not very realistically portrayed, this rings true for the couple in ‘Wedding,’ and the film showcased it in a realistic way. Sometimes family will get in the way of a love that’s meant to be, but they’re simply a hurdle to leap over on life’s path if it’s truly a destined match.

2. CHILDREN SHOULD SPREAD THEIR WINGS

It’s impossible to keep a child chained down forever…especially if she’s 30 years old! Once a son or daughter gets to a certain age, it’s time for them to make their own life decisions, even if you wish they’d take their life in a different direction.

3. YOU KNOW WHAT YOU WANT MORE THAN ANYONE ELSE

As seen in her family’s decision to set Toula up with men she hated, your relatives don’t know you like you know yourself. If you know what you want out of life, it’s time to go get it with your own two hands. Don’t let anyone else try to decide what you want!

4. YOU CAN@T DO IT WITHOUT YOUR FAMILY

Families are known for spawning love-hate relationships within themselves, and this was especially present in ‘Wedding.’ Between meddling in wedding planning to trying to run Toula’s life, the Portokalos’ were a bothersome bunch. In the end, family is still family…even if they are smothering and overbearing.

5. CHANGE IS POSSIBLE IF YOU BELIEVE IN IT AND WORK FOR IT

‘Wedding’ is a movie that shows a woman can be strong and independent, even if she is marrying a WASP. Toula is a role model for any young woman who wants to make a positive change in her life AND nab a prince charming in the process.

6. FAMILIES SHOULD BE HONEST WITH ONE ANOTHER

As much as Toula wanted to hide Ian from her traditional Greek father, the truth eventually came out and caused a rift between the dad and daughter duo. If you’re hiding something from your parents, ripping off the Band-Aid is better than keeping it a secret.

Don’t worry, this is definitely tongue-in-cheek. The real lesson to take away from Toula’s transformation in the beginning of the film is that sometimes a good confidence boost can really turn your life around.

…Or maybe that’s just a Portokalos thing. Either way, everyone has that one part of their family that’s zany and wild, even if they don’t go as far as the family members in ‘Wedding.’ It’s practically a requirement.

9. EMBRACING WHERE YOU CAME FROM

A big motif in ‘Wedding’ is that Toula and Ian come from different worlds, both with pros and cons. At the end of the day, the couple accepts both the other’s origins and their own. As frustrated as she was with some aspects of Greek culture, Toula still embraced her ethnicity, as well as her family.

Lots of family, good food and conversation…what’s not to love? Maybe the sit down dinner during ‘Wedding’ could have gone better, but we’d still love to pull up a chair at the Portokalos table any day.

Ed is an entertainment news writer, and founder of TOMORROW'S NEWS. He always keeps a watchful eye on who and what's trending in the entertainment world. His articles focus on tomorrow's news today, including celebrity news, film news, music news and so much more!
NEWER POSTTHAT WAS THE BOX – March 2016 (Week Four) | TV Reviews
OLDER POST‘LONDON HAS FALLEN’ – Full of Explosive Action!