All the action from OLYMPUS HAS FALLEN has been jam-packed into its sequel, LONDON HAS FALLEN! 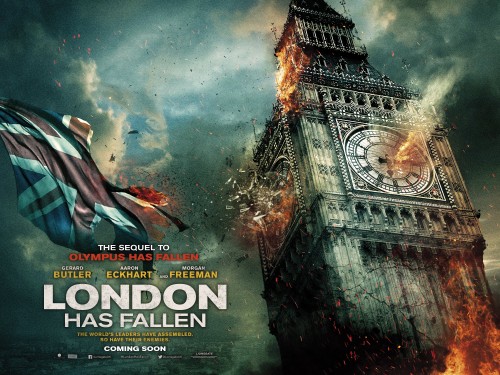 Think of the biggest explosion scenes you’ve ever seen in a film. Maybe it was ‘Die Hard,’ ‘The Dark Knight‘, ‘Rambo‘ or it could have been in any of the ‘Terminator‘ films.

Well ‘London Has Fallen‘ is pretty much right up there with the best booms of all time, as director Babak Najafi  blows up everything in London he can think of with a massive ball of infernal fire.

‘London Has Fallen‘ is the second instalment to 2013’s ‘Olympus Has Fallen‘. Gerald Butler returns as the unstoppable Secret Service agent, Mike Banning.

He accompanies U.S. President Benjamin Asher (Aaron Eckhart) to London for the Prime Minister’s funeral. In true secret agent style he discovers a plot to assassinate the attending world leaders, who gather to pay their respects. 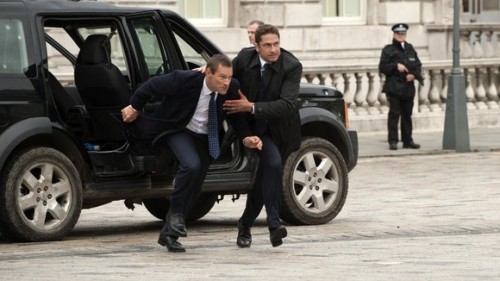 Without warning, as the plot thickens upon us, terrorists unleash a catastrophic attack that wreaks havoc on the city, leaving it in mayhem and ruins.


Unlike ‘Olympus Has Fallen‘, where Banning had to rescue President Asher from a hostage situation the mission this time is to try to escort him out of the country before he’s assassinated.

This time the main bad guy is an illegal arms dealer called Aamir Barkawi (Alon Aboutboul). The same Pakistani terrorist leader who was discovered to be responsible for several terrorist attacks in Europe and around the world. Barkawi is fuelled by revenge for the death of his family caused by a drone strike launched by the United States two years ago.

Gerard Butler is ‘London Has Fallen”s version of Bruce Willis in ‘Die Hard‘ as he leaps into action.


Like Bruce Willis in the ‘Die Hard‘ films, he is a formidable force of invincibility to be reckoned with as he pulls of some out of this world stunts.

Aaron Eckhart also has a more central role as he gets to join in the action and duo with Butler for the majority of the film.

‘London Has Fallen‘ is not like ‘Olympus has Fallen‘. But this is not a bad thing, as we’d certainly hope that a sequel would not be exactly the same as the first movie. What on earth would be the point of that?

While ‘Olympus‘ provided Banning with a redemptive sort of storyline, ‘London Has Fallen‘ throws us into something different. Basically, giving us a taste of one of the many encounters in the life of a secret agent.

Overall, ‘London Has Fallen‘ is a very enjoyable film with its fast pace and gripping unto the edge of your seat kind of action. It offers you what you would reasonably expect, and much more.  It definitely satisfies your thirst for a good action film without too much of that ‘same old film’, ‘been there and done that’ feel most sequels unfortunately have.

Khardine Gray writes fun, romantic fiction and is currently working on her second novel due to be published by the end of the year. She loves any film done by Marvel and all super hero films. She also loves thrillers, films with fast cars and action films. In her spare time when she isn't writing you can find her taking full advantage of an ice rink, or any ballet class she can find. Or, simply shopping and enjoying a good pizza.
NEWER POSTThe 10 Lessons We Learned from ‘MY BIG FAT GREEK WEDDING’
OLDER POSTTHAT WAS THE BOX – March 2016 (Week Three) | TV Reviews