PIXELS – This Time the Games Fight Back! 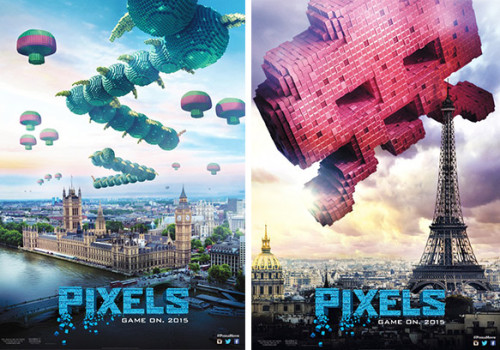 As kids in the 1980s, Sam Brenner (Adam Sandler), Will Cooper (Kevin James), Ludlow Lamonsoff (Josh Gad), and Eddie The Fire Blaster Plant (Peter Dinklage) saved the world thousands of times at 25 cents a game in the video arcades. Now, they’re going to have to do it for real. In ‘Pixels‘, when intergalactic aliens discover video feeds of classic arcade games and misinterpret them as a declaration of war, they attack the Earth, using the video games as the models for their assaults – and now U.S. President Cooper must call on his old-school arcade friends to save the world from being destroyed by PAC-MAN, Donkey Kong, Galaga, Centipede, and Space Invaders. Joining them is Lt. Col. Violet Van Patten (Michelle Monaghan), a specialist supplying the arcaders with unique weapons to fight the aliens.

In 1982 in the hopes of establishing peaceful communication with extraterrestrial life, NASA launches a time capsule into outer space containing images and footage of Earth life and culture. 33 years later, Sam Brenner works for a tech company and his best friend, Will is now the President of the United States. The world is soon attacked by video game characters because the aliens misinterpret enclosed video-feeds of classic arcade games as a declaration of war. They attack the Earth using the games as models for their various assaults including Pac-Man, Donkey Kong, Centipede, Space Invaders, Arkanoid and Tetris. Their technology creates voxels that change form and are capable of turning any form of matter into more of itself. President Will Cooper (Kevin James) calls upon his best friend since childhood, former video game professional Sam Brenner (Adam Sandler), who is now a home theatre installer and had a previous relationship with Cooper‘s wife (Jane Krakowski). To combat the video game characters, Brenner decides to lead a team of retro-gamers Eddie Plant (Peter Dinklage) and Ludlow Lamonsoff (Josh Gad) to defeat the aliens with technology similar to those used in games. 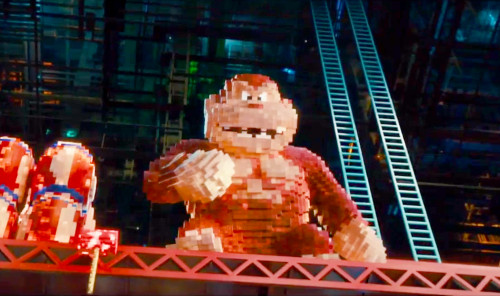 A massive homage: tribute to the 80s with Madonna, Hall and Oates and others advising the Arcaders that they have lost a life or when the next challenge would be.

This is a typical Adam Sandler ‘Happy Madison‘ movie. No matter what happens he always gets the girl in the end.

I didn’t expect much for this movie it’s been slated already and being honest the trailers didn’t really sell it to me. I was pleasantly surprised in that it was funny but real belly ache laughing funny in places. Some of the jokes were predictable.

Stellar performances all around especially Josh Gad as Ludlow the wonder kid. He was just hilarious in the scene when they were addressing the marines.

Q-Bert, one of my favourites, sort of stole the show especially the scene when he got a little nervous. It was like an adult version of ‘Wreck-it-Ralph‘ minus the sugar-coating of Disney and the annoying little girl character.

This film is fantastic! The special effects are absolutely mind-blowing. There are no boring scenes and some special effects are simply mind-blowing fantastic. I still can’t figure out how they did it some of them. The acting is spot on. One scene I really liked is where two kids are competing on classic arcade machines with Donkey Kong loaded on them. The director makes it so you see them playing, their points and the screen as well as the reflection of the games in their eyes. It looks amazing. 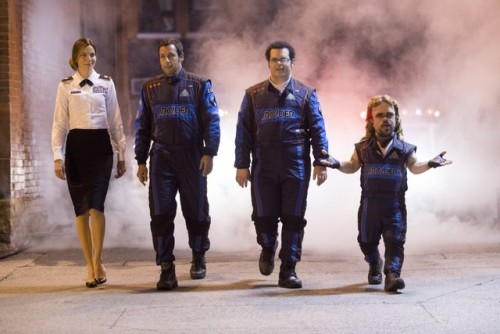 My favourite scene is when they are facing Pac-Man in mini coopers that are designed to be the ghosts who chase and destroy Pac-Man. When Brenner is the only one left and Pac-Man just gets a power up which allows him to eat the ghosts, Brenner pulls of an awesome and insane stunts to run away and it is action packed and just stupendous to watch!

I will give it 4 stars out of 5 instead of three as it was fun. I haven’t laughed that much well since watching ‘Ted 2‘ a few weeks ago. I can see why people don’t like it. It’s formulaic. It’s got amazing CGI and I reckon will do better with the 30-plus demographic as they will have least have played the games. I mean I have Paperboy on my iPhone and we were playing Frogger recently on the Xbox.  The other day I found snake for the iPhone…

All that was missing was the arcade classic of Tron but it was probably after 1982 but then again so was Paperboy.

The scene with Kevin James at the American President sitting in what is supposed to be Downing Street with the Female Prime Minister played amazingly by Fiona Shaw (‘True Blood‘, ‘Harry Potter‘ and ‘Three Men and a little Lady‘) had us in stitches especially as the American President forgets that its good to say it in your head but never to vocalise it.

Anyway you will probably have seen the reviews that are saying don’t go and see it, it’s a complete waste of time. In my humble opinion, I would say that you need to make up your mind for yourself. Go see it for the belly laugh comedy it is.

Enjoy the film on the big screen whilst you still can.

Hopefully the new Vacation film will be just as funny as this was but I will tell you more about that in a couple of weeks.

Until next time, enjoy the trip down memory lane.

Mark is known to his friends as LEGOBear. He loves LEGO Star Wars and buildings. He is an avid Movie Fan and has a Cineworld Unlimited Card so watches a lot of the latest releases. He is also a friend of the owner of this site so that is why he has gotten involved.
NEWER POSTTHAT WAS THE BOX – August 2015 (Week Two) | TV Reviews
OLDER POSTTHAT WAS THE BOX – August 2015 (Week One) | TV Reviews