RITA ORA Says FIFTY SHADES OF GREY Role Will Be An “AMAZING SHOCK”! 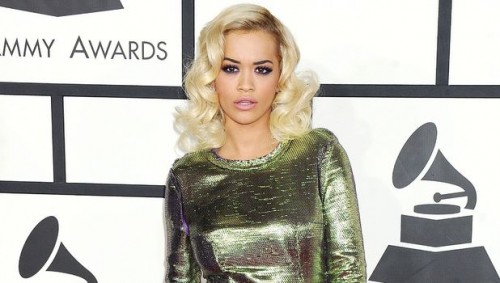 Rita Ora has spoken of Sam Taylor-Wood‘s ‘50 Shades of Grey‘ movie, suggesting it will be the ”most amazing shock ever” and that she will make a ”sexy” transformation for her character Mia!

The 23-year-old singer will star as Christian Grey‘s adopted sister Mia in the forthcoming movie adaptation alongside Jamie Dornan and Dakota Johnson – who have been cast as the sado-masochistic millionaire and his lover Anastasia Steele respectively.

This won’t be her first starring role in a movie, as eagle-eyed fans will have seen her in Universal‘s ‘Fast & Furious 6‘ as a London street racer, and prior to that she starred in the 2004 movie ‘Spivs‘, where she played Rosanna.

“I was nervous because it was the first time I ever did a movie with words but it was so nice. The director Sam, she was incredible, so it was all love.”

When speaking about her part in ‘Fifty Shades of Grey‘, she obviously didn’t give too much away, saying:

“It’s a surprise. Hopefully you won’t recognise me.

The less-than-sexually-explicit movie adaptation of E.L. James‘ raunchy novel will be released on the 14th February, 2015.

Ed is an entertainment news writer, and founder of TOMORROW'S NEWS. He always keeps a watchful eye on who and what's trending in the entertainment world. His articles focus on tomorrow's news today, including celebrity news, film news, music news and so much more!
NEWER POSTTHAT WAS THE BOX – January 2014 (Week Five)
OLDER POSTLANA DEL REY Sings “ONCE UPON A DREAM” On New MALEFICENT Trailer!