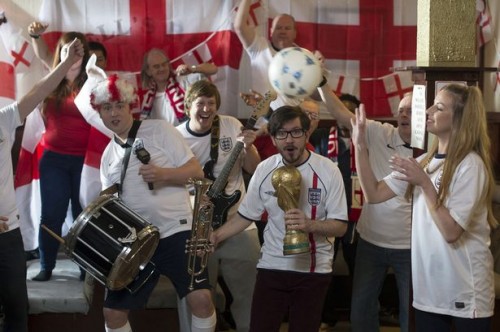 I didn’t watch the first series of ‘Badults‘, and my first encounter with the Pappy‘s comedy group was when they presented ‘Great Movie Mistakes‘ at Christmas and I found them supremely irritating, and so I wasn’t expecting much from ‘Badults‘. However…. I found it hilarious. I think it was loosely based on ‘The Likely Lads‘ episode where they want to watch the World Cup. But it was bonkers and surreal, and thoroughly enjoyable.

The boys fit into the comfortable stereotypes. Tom is the loud know-all; Ben is the dopey one and Matthew the nerdy, nervous one. There were moments when the programme felt like ‘Miranda‘ but with young men. There were surreal flashbacks, vegetables with faces and comedy pratfalls – all filmed on the set of ‘Not Going Out‘ (yes I am that nerdy I recognise film sets). We had a cameo from Robbie Savage and Dan Walker, who gave a commentary on the show and another cameo from the guy who played the legendary Spud Gun in ‘Bottom‘. I’m hoping ‘Badults‘ will sort of fill the gap ‘Cardinal Burns‘ has left. I do like my comedy fix. It’s not all documentaries about prostitutes you know. 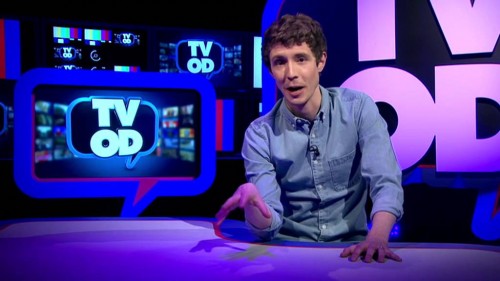 Hey, a programme about the week’s TV shows! Imagine reviewing the previous week’s TV shows. What a weird concept?
There was hardly any advertising for this new ITV2 show, which is amazing because it was really funny and a lot more entertaining than blooming Joey Essex travelling round the world or Tom Daley having his chest waxed or whatever the usual lot of ITV2 drivel is. Presented by Matt Edmondson, it was like a mash-up of ‘Points of View‘ (but with Twitter instead of earnest viewer’s letters), ‘Harry Hill’s TV Burp‘ and Charlie Brooker’s ‘Newswipe‘. Funniest sketch for me was the woman who saw smut in everything, and interviewed in shadow. It was clear she was wearing a variety of ridiculous hats, like a Fez and a Viking’s hat. The ‘Guilty Pleasures‘ skit with Kian Egan in a confession box went on a little bit too long, but was funny all the same, and I enjoyed Matt trying to get Charlotte Crosby to justify her stupid programme, and all she did was prove she was even more stupid that I originally thought she was. Another genius move was the mobile water cooler than interviews people.

I’m really glad this programme is on, because I have missed watching programmes and noticing ridiculous things that Harry Hill would normally point out, and what is even better is with ‘TVOD‘, viewers can tweet in ideas and observations. So the next time Sandy in ‘Emmerdale‘ finishes a sentence by saying the last word REALLY LOUDLY!!! for no reason, I can tweet ‘TVOD‘ and let them know. My one complaint was the generic theme music. Surely it would have been appropriate to use the actual record T.V.O.D by The Normal (YouTube it, kids). Maybe I should tweet them and suggest it. 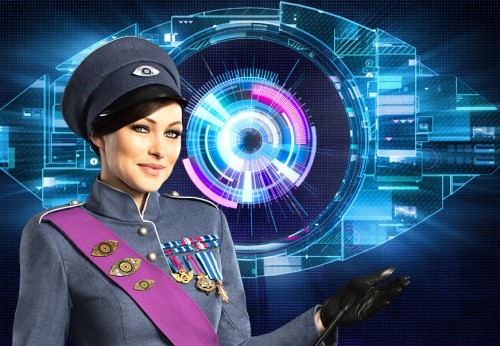 In the longest opening of a series of ‘Big Brother‘, we were introduced to the latest bunch of misfits that we will be talking about (and I will no doubt be reviewing) for the next sixty-two weeks or whatever. I can’t promise I will watch every episode, every night, but I will give you a recap each week. So, after two nights of being bombarded with BS, promises, lies and God knows what else, I will give you a brief resume of our sixteen new ‘friends’:

Tamara – a global gas head-hunter or some load of bobbins (PA). Seems to have got lost from ‘The Apprentice‘. All mouth and promising to be evil. I bet she disappears and you forget she’s in the house. She hates vegetarians, animal rights activists and the unemployed (basically a glam Katie Hopkins).

Mark – is a visual merchandiser (window dresser) and has a weird beard. He’s a scouser and I’m not sure if he’s mixed race or just heavily tanned. Uber camp. Obsessed with Mariah Carey. Will probably do well. He’s also won five grand (more of that later).

Helen – owns a salon. Has a rather interesting past and slept with a famous person. I won’t name names, but let’s just say I don’t think Scouse WAGs who model for Littlewoods will be particularly keen on seeing her on TV for the next three months. But then again, she’ll probably be in Brazil anyway.

Steven – is 23 and a managing director and is also like an ‘Apprentice‘ reject. His parents work for him apparently (he probably still lives with them too). Looks like Ian Lee and leers at every woman as though she is a potential sexual partner.

Danielle – a part-time lingerie model who is also strict catholic that doesn’t believe in sex before marriage or same-sex marriage blah blah. We’ve seen these rent-a-gobs a hundred times on BB. They talk themselves up on their VTs then enter the house and slip under the radar and become like the wallpaper.

Winston – is personal development manager (??). He looks a little like Lewis Bloor from TOWIE and indeed I’ve a feeling he probably auditioned for TOWIE, but was rejected for being too much of a pillock (and that’s saying something). Apart from Churchill, I have never seen a white man called Winston. He seems sweet enough, but I will put him in the wallpaper category too.

Matthew – is media graduate (all the best people are). On his VT he came across like a spoilt rich boy who everyone thinks he’s gay when he’s got a girlfriend. His views on stupid people earned him a night in a Perspex box (more later) but I think he’ll turn out okay.

Christopher – journalist. Hates Kim Kardashian so gets my vote. But he’s a fan of Katie Hopkins so he loses points. But I would have him down as an early candidate for winner, seems like all round okay guy who won’t ruffle too many feathers.

Pauline – 49 and the oldest housemate. Once toured with Kylie. Has been made leader of the house. Chose to reward Mark and punish Matthew by making him spend the night in the box while Mark got to stand in a box and have 5 grand which he gets to keep.

Toya – is a YouTube blogger and a host (unemployed) Whatever. Blurting on about disrespect. Blah blah blah. – wallpaper.

Chris – is an actor and illustrator. Has a-what-I call, creepy face but over all seems quite normal. Reckons he’s going to be a right misery. I think he’s going to become either wallpaper or a potential winner. Often the ones who don’t promise much turn out to be the most entertaining.

Ashley – At eighteen, she’s the baby of the house so I won’t be too harsh on her. Yet another model and this is her first time away from home. I fear she’ll either be overwhelmed by the whole thing or will indeed prove to be a bitch.

Marlon – works in Optics (me neither) – went on and on about ladies. (umm, probably gay). Has the air of a mobile phone salesman. His alter ego is called Marlicio Silver or some crap like that. Wallpaper.

Ash – a male model. The house is full of models. Apparently he has a gang of mates who are all good-looking (probably drive along listening to Wake Me Up Before You Go Go and have play fights with petrol pumps). Quite hot. But loves himself far too much. Has the air of an Alpha male and I think he and Steven will clash.

Anyway, Pauline has been given the power to grant someone the chance of going straight to the final and she has given this to Helen. Let’s just hope she doesn’t prove to be either uber irritating or uber boring!

Karen Mason is a London-based writer. She has published fifteen historical fiction novels and is currently working on her sixteenth. She is also an avid movie goer, with a particular preference for gritty British cinema and a weakness for Jason Statham films! Her music tastes stretch from Muse to the Cinematic Orchestra and she loves discovering new acts.
NEWER POSTSIGOURNEY WEAVER Signs Up For Three AVATAR Sequels!
OLDER POSTDON CHEADLE Crowd-Funding His MILES DAVIS Biopic!