I’m back! Sorry for neglecting you last week, but you were left in very good hands.

In the week of my absence, we saw the start of two new exciting shows – ‘The Life of Rock with Brian Pern‘ and ‘The Line of Duty‘. 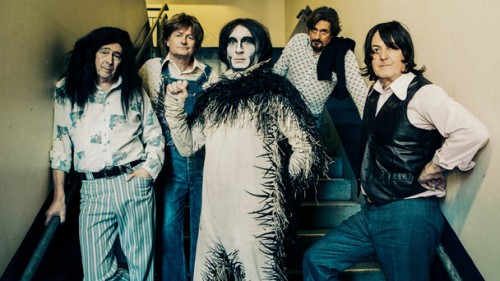 ‘The Life of Rock with Brian Pern‘ is a mockumentary fronted by 70s rocker Brian Pern, about the evolution of popular music. I love mockumentaries. From ‘The Office‘ to the criminally underrated ‘Cricklewood Greats‘ (fronted by new Doctor Peter Capaldi), I love programmes where reality and fiction are blurred to the point of funny.

Pern (Simon Day) is clearly based on Peter Gabriel (he was part of a huge prog-rock band, went on to have a solo career with a video made entirely of plasticine, and invented world music etc). His group was called Thotch and the other members who make an appearance are Paul Whitehouse, playing an upper-class twit who bemoans his lack of hardship on not being taken seriously as a musician, and a barely recognisable Nigel Havers as the foul-mouthed keyboard player. According to Pern, many of the major, defining moments in rock music were down to him; or he at least played a key part in it but has been erased from history (apparently Band Aid was all his idea and Geldof nicked it). One of the highlights for me is the revival of Mulligan and O’Hare (Reeves and Mortimer), the weird folk singers from ‘Big Night Out‘. Mulligan appears to be morphing into a woman and suddenly looks like my nan (God rest her soul). Is it me or are Reeves and Mortimer funnier than they have been in years? (‘House of Fools‘ a wonderful).

I fear anyone under the age of 35 won’t get the humour in ‘The Life of Rock‘, as many of the references are to the 1970s and 80s, and the musicians that were around then. But for us oldies, it’s a really funny take on a subject that has been covered many times, but not in this way. 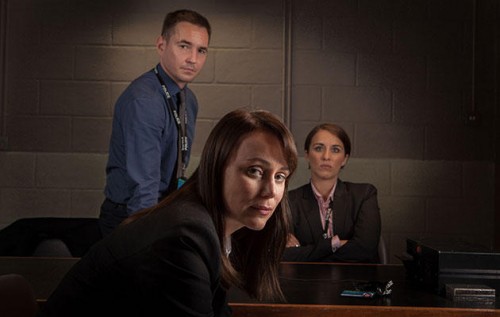 We have also seen the return of ‘Line of Duty‘, about the internal workings of a fictional Midlands-based police force. This time, the story revolves around DI Alex Drake…..sorry DI Lindsey Denton (Keeley Hawes), who seemingly led her colleagues into an ambush in which she was the only surviving officer. Denton immediately finds herself under the scrutiny of AC12 – led by Adrian Dunbar, who played Martin Summers who framed DI Drake in ‘Ashes to Ashes‘ – I’m getting confused). As with series one, even the officers who are doing the scrutinising have secrets, which means in the end you watch and wonder who is the good guy and who is the bad guy.

Hawes is a revelation in this series. As DI Drake, she was beautiful, bubby and slightly bonkers (well she had been shot in the head and sent back to 1981), but Denton is a world away from Drake. She is a woman on the edge, flitting from vulnerable victim of unjust accusations, to violent bully who hits her annoying neighbour over the head with a bottle, and punches her DC in the stomach when she realises she has been sent to spy on her. Frumpy, creepy and yet there is something about her that makes you wonder if she is innocent, or at least was threatened somehow into colluding with criminals. Denton is one of the most intriguing characters I’ve seen on TV for a long time, and I suggest these are the sort of roles Hawes concentrates on now, as she might finally be taken seriously as an actress rather than eye candy.

Without giving too much of the plot of the show away I will just say OMG to:

1) What happened to DC Georgia Trotman in Episode 1;

2) The ending of Episode 2 when Denton is being questioned and she turns the tables on her accusers by presenting them with every secret they hold.

Fantastic writing and acting. My only complaint is that the wobbly camera work becomes jarring after a while. We know it’s edgy. We don’t need our eyes played about with as well.

My weekly round-up wouldn’t be complete without the obligatory Channel 5 shock-o-rama. This week the focus was on British women who have been duped by foreign love-rats. It was pretty much standard women’s weekly magazine fodder, but it was interesting all the same. For me the one I felt most sorry for was nineteen year old Alanah, who met her Turkish lover when she was just sixteen. An eighteen month relationship resulted in a them having a baby, but he turned violent and she is now back home in Scotland, so scared he will come looking for their child, she refused to have the baby’s face shown on TV.

At the other end of the spectrum we have Valerie, a successful business woman who met her lover Marco in Maramis in Turkey and ended up giving him thousands of pounds. Eventually she found out he had nine children with three different people and needless to say, the relationship is now over.

Valerie was pragmatic about it, and put it down to experience, which I guess is the only attitude to take really. I couldn’t understand Jane, who married a guy half her age, from The Gambia, only for him to fleece her and reveal to her that he had a secret girlfriend in the UK for six years. And yet Jane insists on returning to The Gambia for her holidays. Surely there are other sunny places? Could it be a part of her is looking for another “romance”.

The thing that I did notice is that it seems to be quite a common story for the men to say they are in the “special forces”. Sounds ridiculous, but I suppose if your juggling wives/girlfriends/kids it’s a good cover to make out that you’re out protecting the country’s security rather than just being a rat. I think any ladies going on holiday with romance in mind, needs to read recruitment pages from the UK’s secret service. You don’t even let anyone know that you’re applying for a job, let alone if you’ve been recruited. So if someone tells you they’re a part-time James Bond, they’re actually probably a part-time barman. 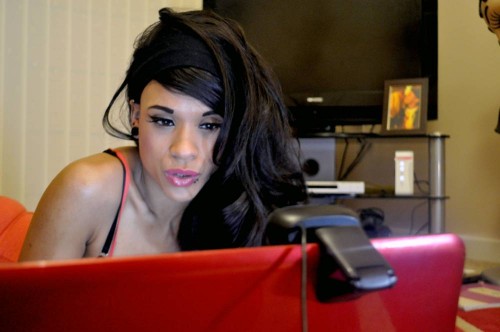 On the BBC, we had ‘The Truth About Webcam Girls‘, which kind of gave the flip-side of the argument and showed how gullible men can be with the prospect of some one to one time with a pretty girl. The documentary concentrated on three girls who make their living by performing on webcams – Sammie, Carla and Olivia. Sammie gave the air of someone who has known pain in their past, and not just from the exploitation of her former career in porn, I would say her anger issues stem back from further in her life. In a committed gay relationship, she is saving to go to university, by charging men £3.50 a minute to watch her jiggle and touch herself. She admits that he hates men, and could quite easily inflict pain on those men who pay to watch her. Her ambition is to qualify as a psychologist and help people. I wish her well, but fear that until she tackles her anger, her dreams may not come true because quite often, people driven by pain end up in a self-perpetuating spiral.

Carla and Olivia were completely different kettles of fish. strong>Carla, an Essex girl who looked like a strange hybrid of Sam from ‘TOWIE‘ and Sophie from ‘Corrie‘, was a porn-star and web-cam star, who enjoyed performing from men; and in one of the strangest scenes, she walked around her kitchen, cooking her lunch in a weird, fishnet bodysuit thing, while men gazed at her from their laptops and paid her money for it! Carla’s main concern is that it is difficult for her to find love. Although when her moronic boyfriend Rob leaves her, by the end of the programme, she hardly seems bothered and I get the feeling she gets a bigger buzz from the work she does than being someone’s girlfriend.

Olivia is a glamour model and insists on keeping her performances relatively tame. She won’t go completely nude, and likes to cover her modesty (yes really). The money is rolling in at the moment, but she is concerned that over time, the demands will become more hardcore and she’ll be forced to make a decision about what she’s willing to show.

It was an interesting documentary. I just wish BBC3 would do a follow-up on the men who actually use these webcams! I want to see their faces (yes their faces, nothing else).

Karen Mason is a London-based writer. She has published fifteen historical fiction novels and is currently working on her sixteenth. She is also an avid movie goer, with a particular preference for gritty British cinema and a weakness for Jason Statham films! Her music tastes stretch from Muse to the Cinematic Orchestra and she loves discovering new acts.
NEWER POSTWarner Bros.’ GODZILLA – Brand New TRAILER!
OLDER POST‘THE LEGO MOVIE’ – Some Heroes Are Born, This One Was Built!