‘TOWIE‘ is back and for some reason, the series began with the girls and Bobby and Vaz all in Tenerife (or Tenners as it became known) for a ‘jolly’. Thank God we were spared the sight of Bobby with his dick in some sort of revolting sling. Although side shots did reveal he was indeed nearly naked.

A lot of the cast are now single, due to the break ups that happened in the previous series. Additionally, there is now beef between Ferne and Danielle Armstrong (seriously is there anyone Ferne has not fallen out with?). Lydia has become a bitch and is meddling and getting into arguments and comically proving that she is more common than she likes us to believe, using words like ‘digged’ instead of ‘dug’ and accusing Danielle of creating ‘Tornado Explosions’ (WTF?). It’s as though Gemma has retired from being the show’s meddling so and so, and they’ve cast Lydia in the role instead. Gemma claims she has become a Buddha (insert your own joke here) and isn’t getting involved in any more aggro and so far, by the end of episode two, she indeed had not had one argument, which has to be a record.

The boys remained at home, and Ricky appears to be auditioning for Britain’s Worst Hoarders. His new girlfriend, who is apparently so much better than Jess, obviously isn’t big on cleaning. To me the new star of the show is Chloe, who has gone from simpering black-haired Barbie, to a feisty, shouting Amazonian, who happily puts Elliott Wright in his place, and anyone who does that is fine in my book. Apparently she was talking to an ex-boyfriend behind Elliott’s back, and when E confronted her, her shouting was so loud, apparently it could be heard from the toilets!

And if there was ever proof that it’s a man’s world. Dan Osbourne was running around playing silly buggers with Lockie, while his poor girlfriend, Lauren from ‘Eastenders‘, was at home recovering after giving birth to a baby. 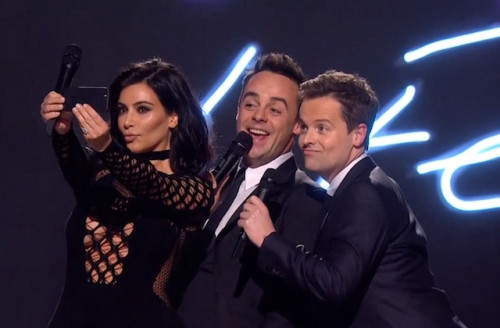 Seriously, what has happened to music? When did it become so middle class? Okay, maybe it has always been middle class, but at least the likes of Blur had the decency to pretend to be common. No, I’m not going on about Madonna falling – that has been done to death. I am going to talk about the awkwardness of the award presenters (yes I’m looking at you Orlando Bloom and Rita Ora), the stupid set, where the awards were presented in the centre of the O2, so no matter where the presenter stood, they had their back to someone. Even Ant and Dec appeared to be uncomfortable. I think the twosome have stepped too far into the world of light entertainment, to be able to handle surly popstars who only give monosyllabic answers to their questions.

The Dark Lord, Simon Cowell infiltrated the proceedings, ensuring he was interviewed by Ant and Dec, and accepting One Direction’s award for Best Video. Ed Sheeran performed, and while he is great on record, personally there is nothing appealing about watching a hobbit playing a guitar and warbling on and on and on. Even Paloma Faith’s rambling acceptance speech was nothing more than a big thank you to her record company and management. There seemed to be lots of thanking the suits, and very little thanking the fans. The people who actually buy the records and attend the concerts.

Kim Kardashian and her giant hips announced the arrival of her hubby Kanye, who seemed to want to recreate Blazin’ Squad (ask your big brother), and apparently he uttered the ‘N’ word, but I confess, I was so bored, I switched over and was watching ‘The Great British Bake Off‘ for Comic Relief (Sarah Brown was robbed!). Take That have conceded to old age and are now playing instruments, I’m guessing because they are too old to dance without risking hip and knee replacements. Cara Delevigne wants to be the meat in Ant and Dec’s sandwich. I’m sure she’s a lovely girl, but she has the air of a sex pest who hasn’t washed for many days. 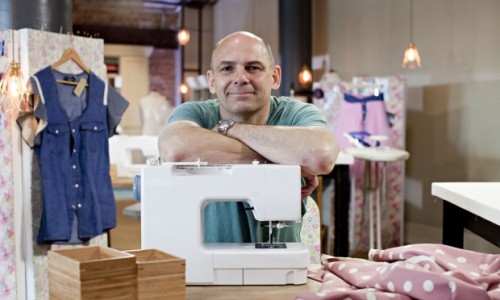 This week our intrepid sewers had to work with structured clothes, and their first challenge was to make a boned corset. An extremely difficult thing to construct, it certainly exposed who was weaker in the pack. I have noticed that soldier Neil constantly makes references to his masculinity, despite being camp and making dresses for his wife; it’s as though he constantly has to make up for it by emphasizing how ultra manly he is. Smug Amanda decided to make her own bias binding, when everyone else had chosen to use ready-made. Needless to say, she failed miserably because of time-wasting. I had to stifle sniggers when Ryan confessed to having nightmares about boning, and indeed when Patrick started using words like ‘rigid’ and ‘boning’ my filthy mind did drift a little. It wasn’t helped by him looking all sexy in a kilt (that’s enough Patrick talk Karen).

Neil won the challenge, with a lovely corset. He also won the alteration challenge, where a 1980s power suit had to be transformed into a modern piece of clothing. Neil made a pink vest dress that was seamless (excuse the pun), Amanda made some frightful green thing that didn’t even look like clothing, Ryan made a dress which I could so see Jasmine Wallia wearing down Sugar Hut in an episode of ‘TOWIE‘, and cuddly bear Paul made a nice Sixties top and I thought it got unfairly marked down.

The comedy came from the final challenge where they had to make a kilt. Most of them stuck to the brief and made men’s kilts in tartan, but some went of them went off tangent and Ryan ended up making a skirt, Neil made a glittery denim gladiator skirt thing, and Lorna had dressed her model as Tony Hadley from Spandau Ballet circa 1980. Needless to say Amanda decided to make her kilt in a completely different way to everyone else and ended up leaving it unfinished and she failed and she lost and went home. As did Ryan, which I thought was grossly unfair Neil’s perfect kilt was garment of the week, and if he doesn’t win the whole thing, I will eat my hat.

Karen Mason is a London-based writer. She has published fifteen historical fiction novels and is currently working on her sixteenth. She is also an avid movie goer, with a particular preference for gritty British cinema and a weakness for Jason Statham films! Her music tastes stretch from Muse to the Cinematic Orchestra and she loves discovering new acts.
NEWER POSTTHAT WAS THE BOX – March 2015 (Week One) | TV Reviews
OLDER POSTThe 87TH ANNUAL ACADEMY AWARDS | Full Winners List!