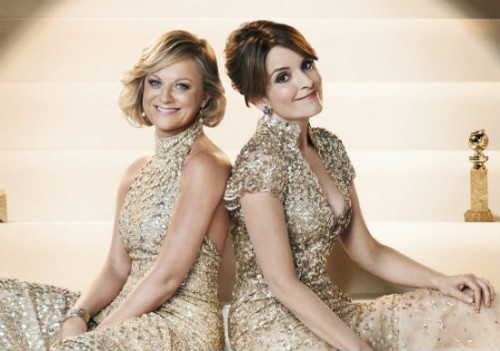 This year’s (2013) GOLDEN GLOBE hosts Tina Fey and Amy Poehler have appeared in a new promo video, which you can watch below.

In the footage, they reflect on why they decided to host, how Fey would like to win Best Picture for herself, how Poehler hopes to meet Angelina Jolie and other celebs that they both hope to “bump” into. They also say they’ve been practising announcing winners, saying “And the winner for Best Actor in a drama is Daniel Day-Lewis for ‘Avatar.'” It’s safe to say that it’s going to be a great night with these two at the head of the show!

U.S. viewers will be able to watch the 70th Golden Globe Awards live from the Beverly Hilton Hotel in Beverly Hills, California on the 13th January, 2013, on NBC!

Ed is an entertainment news writer, and founder of TOMORROW'S NEWS. He always keeps a watchful eye on who and what's trending in the entertainment world. His articles focus on tomorrow's news today, including celebrity news, film news, music news and so much more!
NEWER POSTWho Should Win BAFTA’s EE RISING STAR Award?
OLDER POSTWIN: LES MISERABLES (2013) Movie Soundtrack!