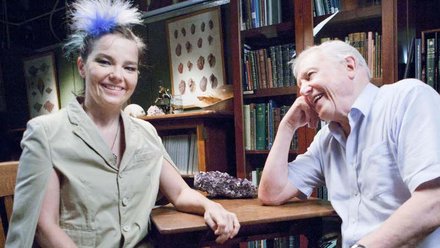 There are no greater quotes that describe music in a better way than these two:

“music is a universal language that contains no words”

It doesn’t matter where you come from, your religion, your culture, your beliefs or your emotions, music is a fine art that unites every single person on the planet. It is the only thing that can express how you are feeling in a way that no words can. Apparently English is the most influential language spoken around the world-this is fine if you are a narrow-minded thinker, however if you rid the boundaries of words then music is by far a much more powerful language than anything else.

People have preconceived ideas that music is just the type of mainstream pop love songs that are broadcast 24/7 on the radio or TV. You can switch on the radio or music channels on TV today and be surprised how alike the music of today sounds.

Channel 4 documentary ‘When Bjork met Attenborough‘ follows iconic Icelandic singer-songwriter Bjork as she tries to break away from this pattern to unite music, technology and the environment for her album she calls, Biophilia.

In the most unlikely expectations of collaborations, Bjork joins Sir David Attenborough to delve deep into the connection of music and nature and how to bring them together visually and auditory.

The documentary brings iconic musician Bjork and nature expert David Attenborough together on a path as she attempts to create a new milestone in music and humans through the use of iPads, computers, crystals, choirs, water, electricity, home-made sharpsicord and many other interesting methods until a final live performance with all of it played in harmony. Bjork even goes to the lengths of creating apps that are now used in the Icelandic school curriculum to allow easier and open-ended  creation of music.

‘When Bjork met David Attenborough‘ is a fascinating, albeit slightly confusing, documentary that joins the translucent dots between humans, nature and music and provides for an extremely informative learning lesson. I thoroughly enjoyed watching the two discuss the possibilities of using objects provided by mother nature as the inspiration of creating something completely different from anything seen or heard before.

As well as creating something new to hear, Bjork also sets out to create a visual image for what people are hearing, adding another dimension to what you hear.

If you enjoy watching documentaries that make you have to use your brain, I would definitely rate watching this because it truly is something you have never seen before and although people may be left bewildered at just the thought of two unlikely collaborators like Bjork and Sir Attenborough, I should tell you that if you rid yourself of any pre-conceived ideas and watch this fascinating documentary with a clear and open mind, you may be in for a surprise.

You never know, you might just learn something new.

NEWER POSTDISNEY’S THE LONE RANGER – Every Cloud Has A Silver Lining!
OLDER POSTSTARS DANCE – Not The Usual SELENA GOMEZ Album?