ZOOTROPOLIS – “An Animated Movie With Substance”

This movie has everything you'd expect in a Disney film, and so much more! 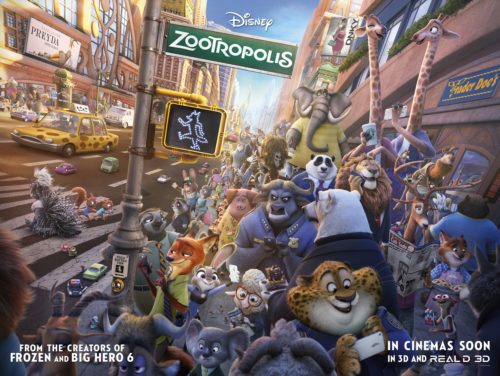 Disney’s animated feature ‘Zootropolis‘ (‘Zootopia‘ in the US) is simply the must-see family film of 2016. It is a delectable combination of cuddly animated comedy and a mystery thriller with grown up themes. The testament to the depth of the world created by directors Byron Howard (‘Tangled‘) and Rich Moore (‘Wreck-It Ralph‘) is that their anthropomorphic universe is so evocative of our own society, in humour and politics.

Judy Hopps (Ginnifer Goodwin), the bunny rabbit, leaves her parents and small agricultural hometown of Bunnyburrow for the city of Zootropolis, fulfilling her dream of becoming a cop thanks to the Mammal Inclusive Initiative. As the first bunny cop in a predator dominated workforce, she is not taken seriously and is assigned to work as a parking meter maid. On her first day she meets and gets conned by Nick Wilde (Jason Bateman), a streetwise fox. It is really this buddy cop relationship between the two that drives the plot. Bateman gives a convincing voice-over performance that keeps you laughing, and invested. The two investigate what appears to be a missing otter case, only to find themselves in a much bigger, city-wide conspiracy.


Their investigation takes them across the city’s different districts, through the wonderfully detailed animal metropolis. It introduces an array of colourful characters such as Chief Bogo (Idris Elba), Mayor Lionheart (J.K. Simmons), Assistant Mayor Bellwether (Jenny Slate), and the hilarious Mr. Big (Maurice LaMarche), the rodent godfather whose bushy eyebrows Brando would have been proud of. Billboards for ‘ZUBER, providing migration at your fingertips’, newscasts from ZNN, phones with a carrot logo and iPods playing Gazelle (Shakira) are but a few of the tidbits richly layered all over the film.

Most impressive, however, was the substance of ‘Zootropolis‘. It preaches, as often Disney films inevitably do, for us to be ourselves, for tolerance in our differences. Yet it deals with so much more. The brilliance of ‘Zootropolis‘ is that in mirroring our world, it displays forms of sexism, racism, and prejudice without having to do so overtly.


The message of the film is clear, and in a time when US presidential candidates preach intolerance, the importance of this message cannot be understated. The film trusts the children to find the meaning and morality themselves, whilst giving adults a satisfying whodunit, one peppered with homages to classics such as ‘Chinatown‘, ‘Scarface’, and even ‘Breaking Bad‘. Whether your child is five years old or Donald Trump, you should really take them to see this film.

‘Zootropolis‘ is out now in cinemas.

David is an aspiring writer currently working on a collection of short stories. He is a contrarian by nature and is happy to trash your film or TV show, if it is not up to standard. If not at the movie theatre or streaming a show online, he is likely watching his dear Arsenal play football.
NEWER POSTCAPTAIN AMERICA: CIVIL WAR – “It’ll Set you on Fire”
OLDER POSTTHE JUNGLE BOOK – “A Truly Magical Experience”