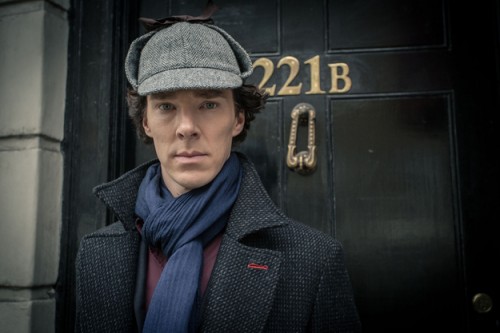 Sherlock is back! After a two-year wait, the world’s favourite consulting detective finally emerged out of hiding and returned to our screens.

Where do I start in my review? There was so much to take in, I actually had to watch ‘The Empty Hearse‘ twice (for professional reasons, obviously – nothing to do with perving over Benedict Cumberbatch). I will try to be unbiased and start with a criticism.

Sherlock’s personality change is a little hard to get to (almost as much as Tina in Coronation Street suddenly becoming a moral-less hussy). Moody, big-headed, selfish, cold Sherlock is suddenly funny, warm (in places), slightly emotional and almost human. But I guess two years pretending that you’re dead and being away from those you love (sort of) would make you reassess your place in the world and how you react to people. The Sherlock we see here is very close to the one in the original pilot (if you haven’t seen it, check it out). In the original ‘A Study in Pink‘, Sherlock is a rather funny, eccentric, human being with super-intelligence and powers of deduction. The one we’re familiar with is often a humourless robot who only dredges up emotions when they can get him his own way. For me this change in character was the biggest thing I had to adjust to, and once I had got my head round it, I could get back to business. 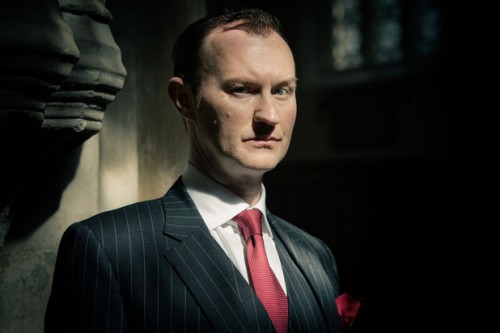 ‘The Empty Hearse‘ was a tour de force, in which we were treated to all sorts of revelations, from a deeper insight into Sherlock and Mycroft’s relationship (pictured above), to what exactly Sherlock had been doing for those two years in the wilderness. One memorable shock was the introduction of the boys’ seemingly ordinary, middle-class parents (played by Wanda Ventham and Timothy Carlton –Cumberbatch’s real parents), when we were all expecting them to come from some weird dysfunctional upper-class clan. Finally there was the fact that Dr. Watson has found a lovely lady to marry, and has grown a moustache.

Martin Freeman’s real-life partner Amanda Abbingdon plays Mary Morstan, the woman who is the new great love of his life (after Sherlock, naturally). On first impressions, I have to say I like her a lot. The chemistry between the two actors makes their interplay seem natural, and it was refreshing that when Sherlock reappears, Mary didn’t feel jealous and hate him for taking John away from her. Instead her love for John makes it so that she is glad that his best friend has come back into his life. The good doctor however reacts in the way I suspect most of us would faced with such an event. His reaction is violent to say the least, as opposed the original canon where Watson faints and carries on as normal. For me, one of the stand-out performances is when John is first reunited with Sherlock, and we see all the hurt, shock, anger, surprise and disbelief on Martin Freeman’s face, without him uttering a word. 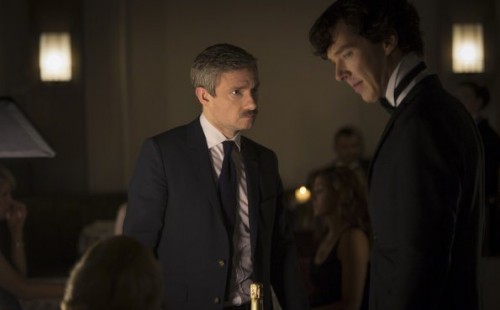 As I touched on earlier, Sherlock himself is like a different person. In parts it feels like Cumberbatch has been unable to completely shake off the swagger he needed to play Khan in ‘Star Trek Into Darkness‘; and whereas in Series 1 and 2, Sherlock’s confidence comes from his belief in his higher intelligence, there are parts in ‘The Empty Hearse‘ where we get the feeling his arrogance partly comes from knowing how attractive he is. Then again, two years is a long time, we don’t know what he got up to whilst hunting Moriarty’s criminal network across the world. Maybe he discovered sex. We only get glimpses of the Sherlock we are so familiar with, when he is searching for the terrorist who has planted a bomb on the London Underground. But this part of the story takes second place to Sherlock’s return and the re-establishment of his relationship with Watson.

I’m hoping the next episode goes back to normal and we see Sherlock and John doing what they do best. Although a large chunk of it seems to concentrate on John and Mary’s wedding, so maybe not.

You may have noticed I have yet to mention the obvious part. How did he do it? To be honest, I still don’t know. And seeing as there are still plenty of people out there yet to watch it, I will make this spoiler-free. In the episode we are given three possible explanations. I do believe one of them (the last one) is the truth; but the other two are highly amusing and both involve shocking (and quite sexy) moments, that no doubt made the fandom go wild and will inspire a thousand tumblrs and fanfic posts. Sherlock has yet to explain to John how or why he did it, and anyone who hasn’t watched, will be quite surprised to discover who it is that Sherlock confesses to. 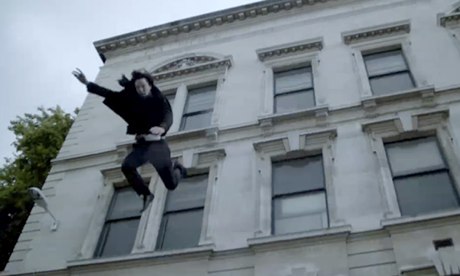 I will say though, that there is a scene, between John and Sherlock on an underground carriage, which reminds me of the scene where Del and Rodney are stuck in the lift in the ‘Time on our Hands‘ episode of ‘Only Fools and Horses‘. And I never thought I’d mention Sherlock and OFAH in the same paragraph! But I’ll say nothing more and leave it for you to watch.


By the end of the episode, I was exhausted, and that was mostly why I had to watch it again. Second time around, I could appreciate the storyline a bit more, because the first time you watch it, you find yourself urging it on just to find out how Sherlock faked his death. There was an element of showing off throughout the whole episode – both from the writers and the actors; but they got away with it because the writing and acting was so superb. I just wish they would make more than three episodes of Sherlock every two years. 2016 seems like such a long way away….

Karen Mason is a London-based writer. She has published fifteen historical fiction novels and is currently working on her sixteenth. She is also an avid movie goer, with a particular preference for gritty British cinema and a weakness for Jason Statham films! Her music tastes stretch from Muse to the Cinematic Orchestra and she loves discovering new acts.
NEWER POSTTHAT WAS THE BOX – January 2014 (Week One)
OLDER POST‘GRUDGE MATCH’ – What a KNOCKOUT!